This blog is migrating to wordpress platform

I have been considering a move to wordpress platform for a while, and have started the migration. This blog will stay active, but readers are kindly reminded that new updates are going to be posted only on http://urbancommune.net

I am working with various tips to ensure permanent links are not affected so that each blogger posting can be redirected to the corresponding wordpress posting. This has been proven to be time-consuming for me and will require more time. In the meantime, my sincere apologies for any inconvenience.

If you were subscribing to this blogger via e-mail or RSS subscription, you can continue to do so on http://urbancommune.net

Taylor & Francis online has put together a selection of papers on China's Capitalism. The topics range from economics and finance to management and development studies. In total, 15 papers published between 2007 and 2013 are listed on its themed page, and are free to download until the end of December 2013.

The selection has picked up my own paper, "Unequal Cities of Spectacle and Mega-events in China", which discusses China's key developmental issues (accumulation and social stability) through the lens of mega-events.

Other interesting papers include:

Civil Society, Corporatism and Capitalism in China by Jude Howell

The 'Beijing consensus' and the 'Singapore model': unmasking the myth of an alternative authoritarian state-capitalist model by Stephan Ortmann
Posted by Hyun Shin at 11:02 pm No comments:

Free access to the journal Environment and Urbanization until 9 December 2013: Includes two papers of mine

SAGE has just announced that to celebrate the 25th anniversary and the 50th issue of the journal Environment and Urbanization (http://eau.sagepub.com/content/by/year), all contents of the journal are given free access. This is for a limited period only until 9th December 2013.

This also means two of my papers from the journal, listed below, are freely available until the date: 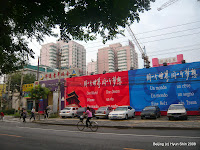 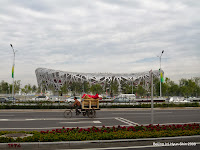 ABSTRACT. Mega-events such as the Olympic Games tend to be accompanied by copious media coverage of the negative social impacts of these events, and people in the affected areas are often thought to share similar experiences. The research in this paper, which focused on the Beijing Summer Olympic Games of 2008, unpacks the heterogeneous groups in a particular sector of the housing market to gain a better understanding of how the Games affected different resident groups. The paper critically examines the experience of migrant tenants and Beijing citizens (landlords in particular) in “villages-in-the-city” (known as cheongzhongcun), drawing on their first-hand accounts of the citywide preparations for the Games and the pervasive demolition threats to their neighbourhoods. The paper argues that the Beijing Summer Olympiad produced an uneven, often exclusionary, Games experience for a certain segment of the urban population.

(Selected images from the paper)

Shin, H.B. (2008) Living on the edge: financing post-displacement housing in urban redevelopment projects in Seoul. Environment and Urbanization Vol.20 No.2, pp.411-426. View on the journal site 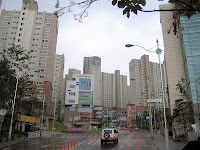 ABSTRACT: This paper examines the displacement experiences of urban poor tenants in Seoul, South Korea, and the constraints on their financing of post-displacement housing. Since the mid-1980s, urban renewal of slums and dilapidated neighbourhoods in Seoul has been geared towards clearance and wholesale redevelopment. This approach is accompanied by legalization of land tenure for dwelling owners without de jure property rights, and is based on profit-led partnerships between property owners (both on-site dwelling owners and absentee landlords) and developers. Since the end of the 1980s, tenants have been given the option, if eligible, of in-kind compensation (access to a public rental flat) or cash compensation. Neither choice, however, reflects the needs of poor tenants who still find it difficult to finance inevitably increased housing expenditures. Policy measures are necessary to increase the range of options available to tenants upon displacement.

(Selected images from the paper: Nangok (난곡) neighbourhood before and after the redevelopment)

Below are the details of the above course. Please circulate and spread the words to any interested students.

Hyun Shin is a specialist in urban Asia and lectures in the Department of Geography and Environment. His research includes the critical analysis of political economic dynamics of contemporary urban development and covers Asian urbanisation, speculative urbanism, displacement and gentrification, the right to the city, and mega-events as urban spectacles. Recently, he was the recipient of the STICERD/LSE Annual Fund New Researcher Award in 2009, which funded his two-year research (May 2009 - July 2011) on the socio-spatial and political implications of the 2010 Asian Summer Games in Guangzhou, China. In 2012, he organised workshops in London and Santiago de Chile, together with colleagues from the UK, Chile and Argentina, on Towards an Emerging Geography of Gentrification in the Global South. These workshops were part of the Urban Studies Seminar Series (2011-2012),funded by the Urban Studies Foundation and the Urban Studies journal. He is currently working on a number of publication projects including a co-authored monograph and a co-edited volume on critical discussions of gentrification in the global South. His book on Making China Urban is also expected to be published in 2015 from Routledge.

For more information, see his personal web page, his department profile or his entry on the LSE Experts directory.

The course explores the contemporary dynamics of urbanisation in Asia, with special emphasis on cities in East and Southeast Asia that have experienced rapid urban development with strong state intervention in city-making and economic development. The course will benefit from the geographical advantage of taking place in Beijing and make use a number of China case studies to examine the differences as well as similarities of urban development between Chinese and other Asian cities.

Applying interdisciplinary and comparative perspectives, the course encourages students to develop critical knowledge and comparative understanding of how urban space is transformed in different social, economic and political settings, and what socio-spatial implications are made in a differentiated way upon local populations. The course will draw on various examples of urban policy and practice from cities across Asia, with emphasis on newly industrialised economies in East and Southeast Asia.

Throughout the course, we ask whether the concepts and theories born out of the (post-)industrial Western urban experiences can be applicable to the understanding of urban Asia. We also ask what are the challenges that cities in East and Southeast Asia face, given its current development trajectory. We do this by examining a set of carefully selected themes that address (a) the integration of Asian cities with the global economy, (2) the distinctive characteristics of Asia’s urban development, and (3) the place-specificities of state intervention in forming urban growth strategies.

Students are required to produce a 1,500-word assessed essay by the end of the course. There will also be a closed book final written examination with essay style questions.

Our Bodies: Whose Property? by Anne Phillips. Book Review in Korean 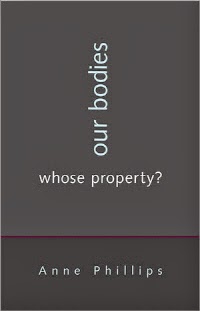 This is the fifth monthly contribution to the Korean daily newspaper, The KyungHyang Shinmun. I have chosen Qin Shao, Professor of History at The College of New Jersey. There is an excerpt of the book in English, which can be viewed on the Asia Society web site on this link.

The book discusses the life and struggle of Shanghai's displacees whose life courses have abruptly changed by the city-wide redevelopment projects. Facing the almighty power of the state, developers, media and so on, displacees are transformed from ordinary residents to an occupational petitioners, a barrack-room lawyer or a community leader. The rights discourse spelled out by these people also provides a fascinating insight for our understanding on how the interaction between reform measures (economic, political and legal) and people's response to these have reshaped their rights awareness and views on social justice.

The contents of this book resonate with my own research on residents' displacement and redevelopment in Seoul (Nangok neighbourhood, 난곡) in South Korea (see my papers from Geoforum and Environment and Urbanization) as well as in Beijing and Guangzhou in China (in particular, my papers from Antipode and Urban Studies). 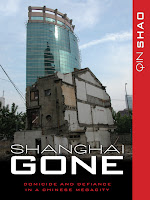 I do research and teaching on urban affairs, with a particular focus on Asian cities. Blog posts alternate between Korean and English.

This blog has migrated. New address below

http://urbancommune.net.
This blog will stay active,
but new updates are only
made at the new address.